Richard Coleman And The Battle For Ashbourne 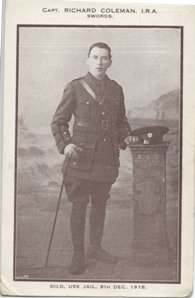 Story of Volunteer Richard Coleman
Richard Coleman was born in Swords Co Dublin in 1890 , he came from a family of eleven most of whom were active in the Gaelic League. He began his education in Swords National school from there he continued his education with the Christian Brothers secondary school on North Richmond Road known as O'Connell's. From an early age Richard had a great interest in religion because his father acted as a church sacristan and on many occasions Richard was called upon as an alter boy. Perhaps this is what fuelled his ambition to become a priest and do missionary work in the tradition of St Colmcille who founded the town of Swords . When Richard finished his studies with the Christian Brother `s he was disappointed not to get sponsorship from the clergy to join the priesthood. Shortly afterwards Richard started work as a railway clerk and was posted to Galway. At the age of nineteen he was influenced by the local A.O.H movement. I lis patriotic feelings stirred, he left the A.O.H and joined Sinn Fein. Partly due to political differences with The Redmondites, he left his job after two year and returned to Dublin and joined the Christian Brothers.
Richard persevered for four years but in the end decided to leave early after being asked to sign a statement saying that lie would not try lirr the priesthood. Richard returned to work for the railway as a clerk awl was posted to Cavan. Richard could not take to this way of ilk, lie then returned to Dublin to take up employment as an nik+rulnnl in a Jesuit College in Milltown and later in St. Vincent's in Phihxhrn uugl,. His family disapproved of these jobs saying his education and inlelli gence could be put to better use. Finally Richard went to work lot thew Prudential Insurance company as an agent in Swords. .lving and working at home suited Richards activities . In April Ir)14 1 loins Mt Donagh came to Swords and enrolled Richard and litany iillwis to form a company of volunteers which quickly rxhr itksl to ninety members. The volunteers met regularly in the National School Ire Swords for training and drilling. They were trained by an ex-British Army sergeant from Dublin. August 1914 saw the outbreak of war in Europe which caused a split in the group in Swords.

John Redmond believing they should help the British Army in a war. This ideal did not go down well with any Irishman wanting to be free of British Rule. A meeting was called in Swords and there where was a split— Sinn Fein supporters and the Redmondites. During the meeting seventy five of the Swords members went with Redmond to enlist in the British Army. The remaining members of the group elected Richard Coleman as their Captain . They were Frank Lawless, Edmund,Colm and Joe Lawless , Thomas Duff, Pat Early, Christopher Nugent, James Marks, Thomas ,Joe and Christopher Taylor ,Peter and John Kelly, Joe and William Norton , Peter and James Wilson (Peter Wilson was killed in Mendicity) James and John Crenigan (John was Killed in action at Ashbourne). The group was attached to the Dublin Brigade and were known as the fifth battalion It can be seen why Richard was elected Captain, his good education and his intelligence as an insurance agent gave him contact with a wide range of people/contacts which helped in his role as leader.
The Rising:
The Fingal Battalion were ready to mobilise on Easter Sunday 1916. They paraded at Saucerstown, each man bringing two days rations. All the men were allowed home that night. On the Easter Monday the men mobilised at Knockshedan Bridge which is located at the back of Swords Village near Dublin Airport. Here the men of Swords joined up with the men of Lusk. Captain Coleman paraded the sixty-five men for inspection and found one shouldering the cocked rifle. To demonstrate the danger of this , Coleman pressed the trigger and the rifle went off. The men later commented that it was "the first shot" fired by the battalion in the rising.
They moved off at mid-day under the command of Thomas Ashe , towards Finglas . The convoy consisted of one motor car driven by Dr Dick Hayes, one motor bike and one horse and cart. The battalion took up position at a farm for the night where the Premier Dairies was later located and is now a development of Apartments called Premier Place. That night on James Connolly's instructions, Coleman was sent with twenty men towards Blanchardstown to create a disturbance—to try and distract some of the military forces from Dublin

Dick Mulcahy took command of the rear column . On nearing Blanchardstown a loud explosion was heard. This they considered , was sufficient distraction in the circumstances and so they returned without taking any further action.
At 10a.m on the Tuesday, Ashe received instructions from Connolly to send forty men into Dublin . However Ashe decided to send only half that number. On having selected the men he sent Coleman into the city in charge of them. Captain Coleman, one of the few wearing uniform, entered the G.P.O with his men and reported to Connolly . They were given a meal and Father Sheehan asked if the men had been to confession. He was assured that Father Toher of Lusk had heard the men's confession.
James Connolly selected six strong men from the group to tunnel through the walls of the G.P.O .These men became the engineering corp of the Rebellion. They were John Kelly, Patrick Caddie, Jack Hayes, Edward Lawless, Dan Trophy and John Mc Neill. Connolly made sure the other fourteen men were well armed. He issued them with two grenades and directed a young man called McLaughlin to lead Captain Coleman and his men to the Mendicity Institute. Connolly's last words to the men were: "I don't think you will get there , but get as far as you can". Peter Wilson described how the group eluded enemy fire and reached the Institute without loss. They advanced up Abbey Street to Capel Street where they were fired upon from Parliament Street, dashing across the street one by one, they went into Marys Lane where they were confronted by a barricade. They continued on over the barricade into Smithfield, crossing another barricade at Church Street.
At Bowe street , they crossed the Liffey and came back along the south quays as far as Bridgefoot Street. Knowing the military were stationed at Christchurch , they took the back lanes and crossed into the Mendicity Institute. Coleman reported to Sean Heuston , and handed over a drunken British solider which they had captured on the last stage of their journey. Sean Heuston occupied the Mendicity Institute with thirteen men on Easter Monday morning to block any advance made by British troops. Shortly after noon a force of four hindered men advance along the north quays but were driven back to the nearby barracks. The welcome reinforcement from the Fingal

Fingal brigade joined this group on Tuesday, for now the buildings were under heavy fire. On Wednesday they heard houses at the rear of the Institute being bored and they knew that their line of escape at the rear was gone. Their attackers crept along the quay under cover of the front garden wall and threw grenades through the windows. One man was killed instantly. With mortar fire striking the building and crossed into a piggery at the rear which gave access to a nearby street and an opportunity to show a white flag . It was here that Peter Wi Ison of Swords was killed by a bullet through the head.
His garrison under Sean Heuston together with others were rounded up at the Rotunda Hospital for identification and then marched to Richmond barracks to be court marshalled that day and sent to Kilmainham Jail. Richard Coleman was sentenced to death but the sentence was later commuted to penal servitude. The volunteers were shipped to Dartmoor England where Richard was put in solitary confinement. Then the prisoners were divided and Richard was sent to Lewes prison in Kent. All the prisoners were released in June 1917, they received a 100 pound grant from National Aid Fund in America.'I'hey all gave their money to start the New Ireland Friendly Society. With 0 Reilly and Thornton, Richard was on the board of directors. He was appointed a trustee and got a salary as a superintend ant.
During the election campaign for Eamon De Valera for County Clare , Richard Coleman traveled to Ennis where volunteers appeared in uniform I'or the first time since the insurrection. Richard paraded and addressed a group of Clare volunteers and was arrested for drilling and sent to Mountjoy for six months. Here he took part in the famous hunger strike in which Thomas Ashe gave his life. The death of I'hoinas Ashe caused such a public protest that the prisoners were moved from the Mountjoy. Richard was sent to Cork and later transferred to Dundalk gaol. At Dundalk they started another hunger strike and were released . In the Spring of 1918 after only a brief period out of prison, Richard and all the leaders of Sinn Fein were re- arrested in connection with an alleged `German Plot' charge.
On the 17th May 1918 the prisoners were gathered at Dublin Castle and Coleman was sent to Usk Prison in Wales. This was a time for Sinn Fein to prepare for the general elections that came in 7 months afterwards, a result which saw forty three of the men in prison elected . But for Richard it was a time to face death. An epidemic of influenza broke out in the prison in November and Richard and a number of his POW's, weakened by confinement became easy victims of the germ. Yet, they received no medical attention and were left in their cells. Dr Morton , as assistant medical officer , took up duty in the prison on the I st of December 1918 diagnosed that Coleman had pneumonia. He was removed to hospital the next day but died on the 7th December 1918 before his family could see him.
Remembering the result of the verdict on Thomas Ashes death, the Home Office instructed the prison Governor to refuse to grant a formal inquest. Richard's brother arrived in Usk but was refused. His brother claimed that he was strong and healthy at the time of his arrest while three of his fellow prisoners gave evidence that poor prison conditions and improper nursing had contributed to his death.
Richards remains were released to his brother and brought back to Dublin. Over 15,000 mourners followed the funeral procession and many more lined the route, while tri colours draped in black ribbon were displayed everywhere. A firing party of six volunteers defied Government regulations and police, fired three volleys of shots over the grave of the patriot. So great was the crowd that the strong police force declined to seize the arms. Richard's sad end was final stroke for victory. Sinn Fein referred to this tragedy in their election posters. The landslide election of the Sinn Fein candidates followed . The country was behind them an object of the rising had been gained.