Swords Castle, was well preserved until the end of the 19th century , with battlements, towers, and centre courtyards, covering about  0.5 ha. Its architecture is thirteenth century. The floors of rooms were supported by arched ceilings. The entrance gate is a perfect arch and a square window immediately above. The gate is flanked by two square towers lighted by slit windows. The top of each tower is flat, reached by a spiral stone stairs which comes outside just before reaching the top. The above photo shows the restoration work which has been completed at the front of the castle, [ The Castle Is Now Open To The Public 1-July-2015]
To the right of the gate are the remains of a Church with pointed windows. There is a remarkable window in one portion of the walls, where the stone sashes are done all in red sandstone. There is no historic tradition about this Castle. No battles were ever fought here. According to history, it was occupied by John Comyn, Archbishop in the eleventh or twelfth century. He may have been a Norman Bishop and came here in the early days of the occupation of Leinster by the Normans as it was the Normans who burned Swords to the ground on six occasions and nearby had a garrison. There are battlements and towers all around the castle, most of which have been beautifully restored on behalf of Fingal County Council. The work is being carried out by F.A.S which is a state training agency.
The work is likely to be completed around 2012 [my estimate] well, considering originally it took over 400 years co be built, we can wait another few years.
The perimeter measures just over 300 meters with just over half the restoration work completed. The remains of Brian Boro are believed to have brought here after the battle of Clontarf.
The Castle was owned by the Church Of Ireland and The Archbishops left Swords for the new palace which got built in Tallagh South County Dublin in 1324. The castle was sold to the Cobbe Family who also owned Newbridge House Donabate.

The castle was leased to Robert Savage for many years of the 20th century and was purchased by Fingal County Council in 1976.
The long term plan for the castle by Fingal County Council is to fully restore and show the castle off in all it's restored glory. The council have already taking in charge most of the buildings to the right of the front gate. When the restoration work has being completed these buildings will be demolished and a pedestrian walk way placed at the front and down North Street.

In my opinion it's not enough just to restore the castle walls, there is hugh potential for tourism in this project, think on the lines of Bunratty Castle Co. Clare with it's folk park and Medieval Banquet. There is hugh expense to the taxpayer in restoring Swords Castle and that expenditure needs to be recuperated. Place a traditional pub inside the grounds and also a visitors centre. Make the castle the central hub for visitors to North County Dublin, promote the arts ie. traditional Irish music.
The image below shows the recently restored work of the west side walk way which now includes a safety hand rail.

New Roof On Castle Chapel
The new roof is now completed on the old ruins of the castle chapel. Unfortunately new materials were used in the construction of the roof in the form of slates and terracotta ridge tiles. These materals were not in use hundreds of years ago so in keeping with the time period and age of the castle these slates and terracotta should never have been used. A thatched roof would have been more appropriate. With the front of the castle which faces Main Street now almost finished the former Ryans pub and the other derelict buildings which stretch 100 meters down North Street will be demolished. 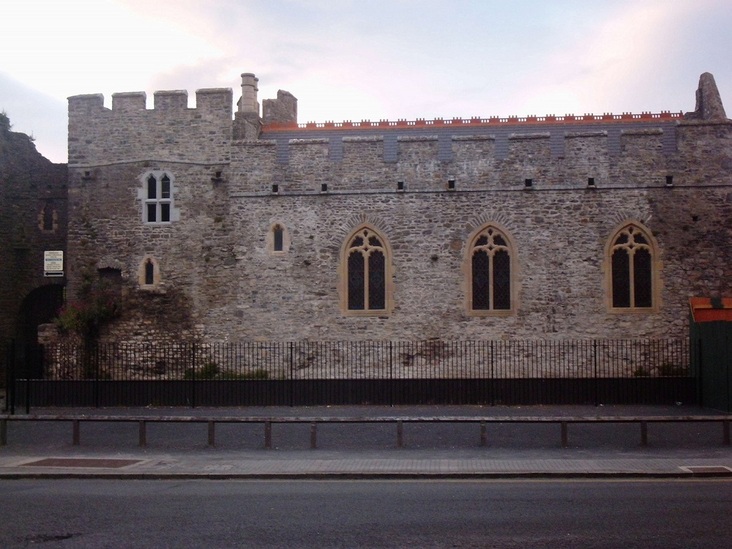 Swords Castle Is Now Opened To The Public
The Castle will be open from 10.00am to 6.00pm from 1st July 2015. Tours will be provided courtesy of Fingal Tourism subject to demand, who can be contacted on email info@fingaltourism.ie or by telephone 01 - 840 0891 or 01 - 890 5144
If you have any paintings or pencil drawing of places in Swords and would like them displayed on the site then send me a photo please
On the 17th of September 2018 the castle was used by the makers of the hit series The Vikings. Filming went on into the early hours of the morning. Swords castle has been used by film makers several times since it got it's new facelift.