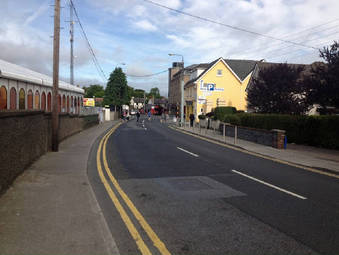 History Of Swords Co. Dublin Malahide Road-The East Side. Also included are parts of Main Street
From Malahide Road, going north on right, was Weldons, a large house on the corner. Nag Weldon owned a lot of cottage property, some of them only two roomed, let at 1/- or 2/- a week. Two storey houses were along this side. A very picturesque two storey thatched house with upstairs windows cut in the thatch was Howards butcher shop, who were also farmers.

Next was a thatched house, one storey, NcDermotts, green grocer and general dealer in coal, etc. Then McEvoys, who had a sweet shop, and owners of the adjoining three cottages. Two storey houses again, Clerys, Shaws (shoemakers); one storey houses, Webb, Tinsmith; two storey houses, O'Tooles, Registrar, a lodging house, and next door Weldons, a Public House. Historic House


Next was a detached thatched farmhouse,  with farmyard. This is the most historic house in the village, as a meeting place of the new Sinn Fein and Gaelic  vement, which started about the turn of the century. The Duffs were Fenians, Sinn Feiners and Gaels. John Daff emigrated to America and went to the Boer War with Major iiacBride's Irish Brigade. Tonmy and Mary Duff were active supporters of the Gaelic League and later Sinn Fein. Tommy fought with the Fingal Brigade in 1916 and Mary was in Cumann na mBan, and the Gaelic League. The Sinn Feiners always in there around the, big open hearth. It was called the War Office. The house was burned down by the Black and Tans.


Next to Buffs was a house called "The Old Walls". The high hard gable back from the road was used as a ball alley, and many rood games of handball were played there by the local boys. The old walls were always covered in wall flowers in full bloom in the spring. The seeds blown from the back gardens taking root in the crumbling walls. I never heard the history of the place, whether it was burned or fell into decay, but it must have been a substantial house when new. Next came a terrace of two storied houses, still intact but one demolished. McDonnells grocer and pub, later Kellys, sweet and confectionery, and Lawless, a butcher shop.

Frank Lawless was a Fenian, Sinn Feiner and Gael, also a fanner and later T.D. for North Dublin. Next Krowd, a drapery shop. Next was the R.I.C. Barracks, which was captured by the Fingal flying column in 1916, and all arms and ammunition taken

Next was Taylors, public house. This was formerly Foleys. The Taylors came to Swords about 1898. The father was 'rom Rush, Co. Dublin, and the mother was a Dowling from North Strand, Dublin. They had twelve children; three sons were out in 1916 and active in all the Sinn Fein movement. The house was burned down by the Black and Tans. Next, at the corner of Chapel Lane, Tom Fagans, harness maker, a great meeting place for men and boys, particularly for the older generation who favored the United Irish League. There was also a regular card school here, and lively  discussions