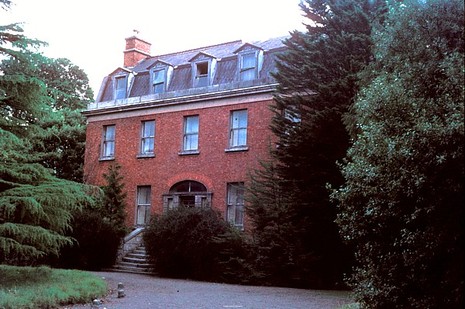 On the right, east side, below the Chapel Lane, was Swords House and Demesne, occupied by Colonel Eitzeustace Foster, the local landlord, who owned a lot of the house property and lands in the town. His demesne was bounded by Chapel Lane, Sea Town or School Lane, Main Street, and Malahide Road, about 700 acres in all.
The entrance in the Main Street at the corner of Chapel Lane was bounded by a 10 ft. stone wall, overhung by a shrubbery of evergreen Irish Oak trees. The entrance had a beautiful bronze gate about 15 ft. wide and 3 ft. high, in two leaves. The mansion was only about 100 yds. from the gate, by a short curved drive, bordered with flowering shrubs. There was a pretty little lodge at the corner of the drive opposite the gate, the occupants of which answered calls at the gate. There was a side entrance in Chapel Lane and a farmyard entrance in School Lane, beside the farm buildings.

The House was of red brick and cut stone and four storeys, a flight of ornamental steps to the front door on the second floor. The first ground floor was underground level with a wide area right around the buildings.
Colonel Foster was a descendant of the Taylor family, an aristocrat family who succeeded in retaining their lands and religion after the Reformation, families known as Castle Catholic. The Colonel himself was related to a Count Russell in France, apparently through his father's side of the family, and he spent most of his winters in France, and when he died all his property went to his French relations.

He was unmarried. He was generous to his servants and tenants. His family gave the land for the Catholic Church and Schools. He was Governor of the Endowed Schools Board and a Justice of the Peace. He is buried in an unmarked spot in the Catholic Cemetery, although he and his ancestors always had a private bench in the Catholic Church, and a private door of entrance to the Catholic Church.
The Parish Priest had a special path and right of way through the demesne from the Parochial House to the Church.
Irish politics overtook his generation and he is almost forgotten to the neighborhood.

The big red house known as Swords House was demolished to make Swords Town Park. That lasted a few years until the council wanted office space in the heart of the town. To get rid of the town park the council took a vote. Most of the Town Councillors voted to retain the park, still the council went ahead even though most residents wanted to hold onto their park. Perhaps it would have been better to keep Swords House and do something practical with it. Its a pity there wasn't a preservation order on the house, as it was such a splendid building.  I have said it before and I'll say it again, ''democracy doesn't work''.

Re- Frances William Coleman re-fares to Colonel ''Foster'' when in fact his name was ''Forster''
Fingal County Council have recently named a street after him. It's the street that runs parallel with Main St. [It's since being renamed ]
Its where the Post Office was before it moved to The Pavilions shopping centre. In fact the Colonal once owned all that land