The Most Dangerous Roundabout In Ireland

The Most Dangerous Roundabout In Ireland    October 2012- Updated June 2012


The Malahide Road Roundabout in Swords which is close to The Pavilions Shopping Centre is most likely the most dangerous roundabout in the country. There's an average of 2 crashes per day on or close to the roundabout. The most likely place to be involved in a collision is  after coming from The Malahide Road while turning right [ taking 3th exit] . The problem arises when the vehicle coming from the Malahide Rd. and is on routh to The Pavilions decides to enter the roundabout in the left lane. There may already be traffic in a stationary position on the roundabout having come from the north of Swords and are heading to Dublin in the right lane. When the traffic starts to move the vehicle that came from the Malahide Rd. decides to turn right in the left lane and the vehicle that came from the north of Swords is going straight towords Dublin, this is the most common crash on this roundabout. As you can see from the photo on the right the road marking are vague and some people may be confused. While entering a roundabout and taking the third or forth exit then get into the right lane. See image right.

The 3th place most likely to be involved in a crash on the roundabout is while traveling east from the pavilions towards the N1. The road marking on this road are incorrect. They state one can go straight [ 1st and 2nd] exits coming from the pavilions. If traffic is expected to be able to travel to the Malahide Road in the right lane, which is suggested by the marking then the centre lane on the roundabout should clearly say so. But the centre lane says right turn only. Again this is very confusing. To stay safe get into the left lane coming from the Pavilions if heading to the Malahide Rd. And get into the right lane if heading to the Drynam Rd. or towards the city.

The average cost of a claim in Ireland is €4,300. With two crashes per day on this roundabout the cost is €8,600 per day. On a yearly basis the cost is estamated at €1569500. The figures of the average cost of claims are from The Central Bank Of Ireland.
Several things could be done to bring down the amout of crashes on this roundabout. The first would be to make the road marking clear. This would involve writing the names of the road you intend to take while approaching the roundabout, example, when coming from the Pavilions you would see on the right lane approaching the roundabot the words Drynam And City Only and the left lane would say Malahide And Northbound Only.

The second would be to switch off the traffic lights. It has being proven time and again that when the power fails on the traffic signals this roundabout doesn't get backed up with traffic. Give it a week and monitor what happenes. After all these lights are from a previous time before the M1 Extention was built to bypass Swords.

The photo. above shows a crash on the roundabout. The small silver car had come from the Malahide Road and was heading towards the pavilion centre in the left lane. The large grey car was travelling up the duel carriageway and heading south bound towards Dublin in the right lane. The large grey car had being stopped in traffic on the roundabout. In the meantime traffic from the Malahide Rd. had started to move on to the roundabout in the left lane but the right land was still stationary. When the right lane started to move the large grey car continued un his journey but an this stage the small silver car was turning right in the left lane and ''Bang'' . Although this was not a serious accident it puts the price of car insurance up for all. Again this is a reminder to Fingal Co. Co. who have recently carried out a traffic survey on this roundabout  and found no faults, the mind boggles at this survey as the above kind of crash is happening on a daily basic on this ''Most Dangerous Roundabout''. It simple isn't working as anybody that uses it will tell you. 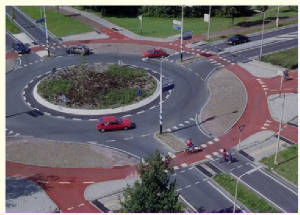 The above image is an example of a pedestrian and cycle friendly roundabout. The photo was taken in America where they have only recently embraced roundabouts. They seem to be heading in the right direction as there are dedicated pedestrian areas to cross in safety. This is the standard all local authority councils should be aiming for.  It would also encourage more motorists to leave the car at home.