Side Streets In Swords Dublin 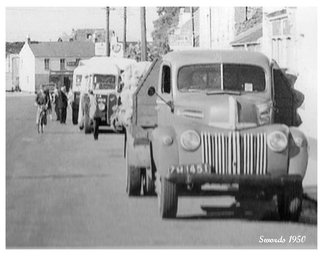 Main street Swords 1950s
On the left going north, at the entrance to town, at O'Tooles Public House, is a road leading to the village, called the Forest, this was the Forest Road. About 50 thatched and slated cabins
are on each side of the road for about 200 yards, and a small side street off it called the Bell Race. All these cottages were let at about 1/- a week, and were occupied by labourers, Connors, O'Tooles, Savages, McNultys, and other names I cannot remember.


Below O'Tooles Pub is a straight road leading diagonally to the left and to the river and the Protestant Church, called the New Road. There were no houses on this road. At the Bridge at the end of this road, a lane led . along the river to the right, called the Hollow Lane, which had a row of about six dilapidated cabins and the Lane turned again right back into the Main Street. At the bridge end of this lane, there was a two storey stone building standing in its own grounds, which was a Protestant Boarding School for boys which is now The Old School House Pub


Between the cottages and the river bank, there was an open grassy space and grassy mounds which were called the Hollow Banks, and a favorite playground for boys and girls.
Next turn left was the opening of the Hollow Lane, where it mat the Main Street. Next turn left was Connors Lane, which was a narrow lane leading to the river for drinking horses, washing cars and drawing water. There was one cottage in this lane. Next left turn was Earley's Lane, already referred to. Next left turn, a strip called The Green. The Village Pound was about 50 yards down this street, on the right, at the side of a Public House, O'Connors. A row of.slated houses on the left brought you to the village watermilI .

Beyond the millhouse, there was a bridge across the river Ward. From the bridge, there was a nice view of the Mill Race. The river was daxamed by a weir which made a picturesque waterfall with the mill wheel on the left and a neat cottage surrounded with tall poplar trees on the right, gardens, trees, and low hills in the background of the sheet of water of the mill race. This cottage was occupied by Widow, Nag Murphy, a well known character who reared a nice family. Nag could tell the history of everyone in the town, and was always a figure at every wake in the town.

A hill rose above this bridge and the road forked left to the Protestant Church. On this road, there were several large walled in dwellings standing in their own gardens, all occupied by Protestant gentry, including the Protestant Rector and Curate. At the brow of the hill was a row of thatched and slated cottages and a farmyard, where Savages' long car and hackney hired cars were stabled.

On the right from the bridge, there was a stone quarry, where limestone rocks were blasted for roadmaking. A few cottages fronted the river in a place called the Rock Garden. The road to the right at the mill hill leads to Co. Meath. There were many rows of mud thatched cabins in side roads from this road. This was the very old part of the town, all this area was called The Green.