To come back to the turn to the Pound and the Green: Right facing you was, Swords Castle, well preserved, with battlements, towers, and centre courtyards, covering about six acres. Its architecture is probably ninth or tenth century. The floors of rooms were supported by arched ceilings. The entrance gate is a perfect arch and a square window immediately above. The gate is flanked by two square towers lighted by slit windows. The top of each tower is flat, reached by a spiral stone stairs which comes outside just before reaching the top.


Next a row of low dilapidated thatched cottages. Then a long thatched cottage, well kept, beside the entrance to her farmyard, occupied by the Widow Farrell, and her beautiful only daughter Molly. The Farrells were great supporters of the Gaelic League and Sinn Fein. 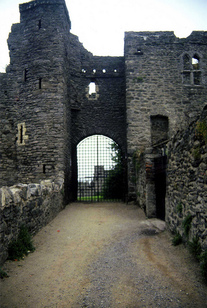 To the right of the gate are the remains of a Church with pointed windows. There is a remarkable window in one portion of the walls, where the stone sashes are done all in red sandstone. There is no historic tradition about this Castle. According to history, it was occupied by John Comyn, Archbishop in the eleventh or twelfth century. He may have been a Norman Bishop and came here in the early days of the occupation of Leinster by the Normans, and thereby had a garrison. There are battlements and towers all around the castle which is still in good preservation and can be visited.

In front of the Castle was Tyrells Pub, and beside the Pub in front of the Castle, was an open space which was the usual verve for Public Meetings. In my longest memory here the United Irish League and candidates for election to the Rural District Council held their meetings. Five or six empty beer barrels were rolled out of Tyrells Pub, planks were laid across them, and this made a steady platform for the speakers. On special occasions, a framework of wood would be erected in front with branches of evergreens and a few green flags for decoration.

The road is wide in front of this Pub, and could hold a good crowd without interfering with the traffic. There were no motorcars then. On one occasion, I remember a travelling menagerie set up their show just in the middle of the road at this bend, in the street, leaving just enough space around about their caravans for a horse and cart to pass. About •ten caravans were placed in a circle. The animals in some of the caravans were in cages which were open to view from the inside of the circle, and the Band played on a raised platform in front, beside the entrance.

Later a fingerpost on the top-of a square pier of concrete was placed in the middle of the road. This became a handy platform for political meetings, where only one speaker could appear above the crowd. . The square at the side of the Pub was also used for many years for small travelling shows, fancy fairs, etc.
Next to Tyrells was Reynolds, Howards, the local Painting Contractors, who did a good business painting and decorating, wallpapering, window glazing, etc. for the whole neighbourhood, including the big country mansions round about.

Then was Peter Connor, the Relieving Officer of the town, or now one would call him the local Health Officer, a very fine fellow with great ideas of the old style. Mulvanneys and Quinlivans came next, and then Dunnes, the local bakery, which abutted on to the walls of the Castle. Dannes white bread was famous.
Next to Dunnes was Mr. Jones, ex. R.I.C. Sergeant, the last Protestant Police Sergeant in Swords. Up to his time, no Catholic could be apointed Sergeant of Police. Then there was a row of neat brick and stone cottages, called Baker Cottages, built presumably for workers in the Baker Estate at Lissenhall. A detached thatched cottage next, was used as a school for teaching girls lace and crochet making.
Neat door lived John Ball, a good old family. Below Ball was a detached two storey farmhouse, Longs, of the town, and beyond
that a long row of thatched mud cabins, McGartolls, shoemaker, and agricultural workers, etc. occupied these. Then the last pub in the town, The Big Tree.